Tiger Beetles of the World

Illustrated guide to the genera

The first publication in a series of large-format picture guides focuses on a group of probably the most beautiful and diverse members of the Cicindelidae family, known as the Tiger Beetles.

Tiger beetles are one of the predatory groups of insects that fascinate thousands of people around the world and are very attractive to photographers and nature observers. The goal of this unique visual guide is to introduce these amazing predators from the world of insects to all nature enthusiasts.

The guide will help you familiarize yourself with approximately 125 genera and 338 species of the Cicindelidae family structured according to Jürgen Wiesner.

One or more representative species of each tribe are illustrated in the book by large photographs, accompanied by information on sex, size, place of origin and list of countries of distribution.
Species are presented in a top view, side view and in close-ups showing details of mandibles as well as the pronotum and scutellum. For species diversity, the guide is supplemented by additional specimens with a classic top view, and several rare specimens from museums.

Illustrations of some of the species have never been previously published.

The book serves as a source of illustrated identification and, due to its topicality and species diversity, is useful for professional and amateur entomologists, as well as for scientists.

Foreword to the Tiger Beetles of the World

Tiger beetles are one of the most beautiful and diverse in order Coleoptera. They live practically in all natural belts and occurs in different habitats excluding the Arctic and Antarctic deserts. All Cicindelidae are the active predators and most of them use the  active flight for the hunting.
The variety of shapes and colors, as well as the complex hunting and sexual behavior of tiger beetles have always stimulated their study not only by academic scientists, but also by numerous naturalists. This makes tiger beetles one of the most comprehensively studied beetle families. Despite this, many new species are described every year around the world.

The proposed book is beautifully illustrated and covered whole diversity of the genera of Cicindelidae. Without a doubt, this book will be interested to a wide range of nature lovers of all ages. 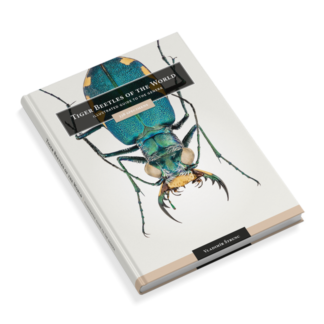 You're viewing: Tiger Beetles of the World € 89.00
Rated 5.00 out of 5
Add to cart
We use cookies to improve user experience, and analyze website traffic. By clicking “Accept”, you consent to store on your device all the technologies described in our Cookie Policy. You can change your Cookie settings at any time.
Reject Accept
Manage consent