Second and enhanced edition of the popular title Ground Beetles of the Africa, which contains a selection of the most attractive beetles of the family Carabidae from the Afrotropical Region and especially Madagascar.

This is the second, revised and enhanced edition of the popular title Ground Beetles of the Africa – Ethiopian Region and Madagascar. In addition to several new species, the most visible change is a small map next to each species in the main section, showing its occurrence and the place of capture of a particular specimen.

All enhancements in the 2nd edition

The aim of this visual guide is to introduce amazing representatives of the Carabidae family, commonly known as Ground beetles, belonging to the Afrotropical region to all nature enthusiasts. The book is exceptional in its detailed identification views and the multitude of genera and species represented. Specifically 860 species from about 170 genera are pictured, structured according to W. Lorenz and J. Robertson & W. Moore. The classification of tribes is not definitive and is provided in the book for orientation and grouping purposes only. Illustrations of some of the species depicted here have never been previously published.

Taxonomy and basic descriptions of species groups can no longer be relegated only to ponderous tomes that use jargon and complex prose indecipherable to all but a few experts. The rising importance of citizen scientists dictates that guides with simple language and clear images must be made available. The attraction of non-professionals to understudied taxa is especially important for less-developed parts of the world.

Vladimír Štrunc’s delightful publication, Ground Beetles of the Africa – Afrotropical Region, introduces the world of African carabid beetles to citizens and students within Africa as well as worldwide. This book presents beautiful photos and locations of more than 800 species of carabid beetles. It serves as the most complete pictorial identification guide of this beetle family common throughout the continent. The quality and clarity of these photographs will undoubtedly appeal to natural history hobbyists, professional entomologists, and artists. Hopefully, this book will serve as a basis from which more detailed knowledge of the distribution, behavior, ecology, and economic importance of carabids in Africa will eventually rise.

Ground beetles (Carabidae) are one of the numerous and diverse families of beetles (Coleoptera), comprising at least 35,000 species in the world fauna. They are known from all continents except Antarctica and inhabit a variety of habitats including mountain, mainland and insular tundra, as well as various deserts and extreme highlands. The greatest diversity of ground beetles is observed in tropical and subtropical regions, where a huge number of endemic and subendemic species live. One of the richest and most diverse fauna of Carabidae is known in the Afrotropical realm (formerly known as the Ethiopian Region).

The book presented here is an example of a beautifully illustrated atlas that, thanks to high-quality digital images, will allow you to become fully acquainted with African ground beetles and to appreciate their diversity. This approach can support both the popularization of entomology and the protection of the natural environment on which the diversity of these insects is directly dependent. Hopefully, this book will be one of the main impetuses for the younger generation to study not only ground beetles but also insects as a whole.

There are no reviews yet. 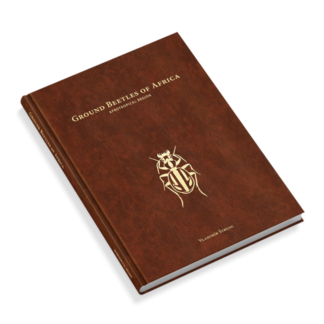 You're viewing: Ground Beetles of Africa (2nd edition) € 129.00
Add to cart
We use cookies to improve user experience, and analyze website traffic. By clicking “Accept”, you consent to store on your device all the technologies described in our Cookie Policy. You can change your Cookie settings at any time.
Reject Accept
Manage consent