Tiger Beetles of the Madagascar Region

(2010) Tiger Beetles of the Madagascar Region (Madagascar, Seychelles, Comoros, Mascarenes, and Other Islands) – A Taxonomic revision of the 17 genera ocurring in the region (Coleoptera: Cicindelidae)

This book is the author’s third and last revision of Madagascar’s tiger beetles (Cicindelidae) and is a continuation of the previously published monographs (Moravec 2002, 2007) in the series “Tiger Beetles of Madagascar” entitled “Monographs of the genus Physodeutera” and “Monographs of the genus Pogonostoma”.
In contrast to the previous monographs, the present book is a taxonomic and nomenclatural revision of the remaining 17 different genera occurring throughout the Malagasy region, which geographically includes Madagascar and its neighbouring small islands, as well as archipelagos including Comoros, Seychelles and Mascarenes.
The total number of taxa revised and recognized by the author (including two previously monographed genera) includes 19 genera, 28 subgenera, 237 species and 21 subspecies, representing one of the richest tiger beetle faunas in the world.
The comprehensive revision presented here, based on the author’s examination of more than 8500 specimens including relevant type material, includes 17 genera and four subgenera, all of which belong to the phylum Cicindelini. Among them are six genera of the subgenus Prothymina and eleven genera of the subgenus Cicindelina, comprising 60 species and seven subgenera, including three new species, two new subgenera and one new subgenus described here. Some important changes in taxonomy and nomenclature according to the ICZN are proposed.
Most genera, such as the extremely rare Mascarene genera Diastrophella and Megalomma, are revised and illustrated in detail for the first time, including illustrations of their larvae.
The biology and distribution of each species and subspecies, including adult and larval behaviour (where known), based also on the author’s own feldrex research and observations of his colleagues during their numerous excursions to different areas of Madagascar and the Mascarene Islands (Réunion, Mauritius and Rodriguez), are elaborated and supplemented by distribution maps. 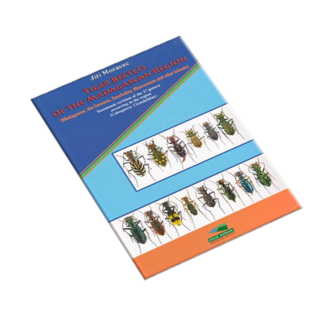 You're viewing: Tiger Beetles of the Madagascar Region € 79.00
Add to cart
We use cookies to improve user experience, and analyze website traffic. By clicking “Accept”, you consent to store on your device all the technologies described in our Cookie Policy. You can change your Cookie settings at any time.
Reject Accept
Manage consent